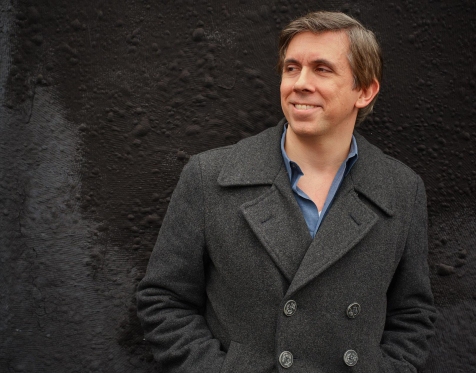 He may not write for GQ, but this suit looks like he models for them.

Though he’s appeared in such prestigious publications as Rolling Stone and Billboard, he’s most known for his writings in Slate. Every time a new song reaches the top spot on the chart, Molanphy writes an installment of his regular Slate series “Why Is This Song No. 1?” analyzing which factors — social, cultural, even political — contributed to the song’s ascendance. He’s now penned dozens of these articles, every single one a fascinating and educational read even if you hate the actual song. Even if you haven’t liked any new music since 1974, you’ll find Molanphy’s contemporary analyses fascinating nonetheless.

On a personal note, he was also gracious enough to include me on a June installment of his podcast Hit Parade, in which we took turns trying to stump each other with music trivia. And he did stump me! On one question, at least. Listen to the episode here or by searching on your favorite podcast app under the title “Music Trivia: The MTV and Alt-Rock Edition.” (Listen to the whole thing, but my appearance starts about nine minutes in.)

As a freshman at Yale in the fall of 1989, Molanphy contributed his first-ever piece for the college newspaper, the Yale Daily News. It was about music, alright, but quite the opposite of the genres he would come to specialize in during his subsequent career. An image of the article is below, along with a transcription.

Check out his website Chris.Molanphy.com, follow him on Twitter @ChrisMolanphy, and check out all his Slate articles and podcasts — including his regular article series “Why Is This Song No. 1?” and monthly podcast “Hit Parade” — here. 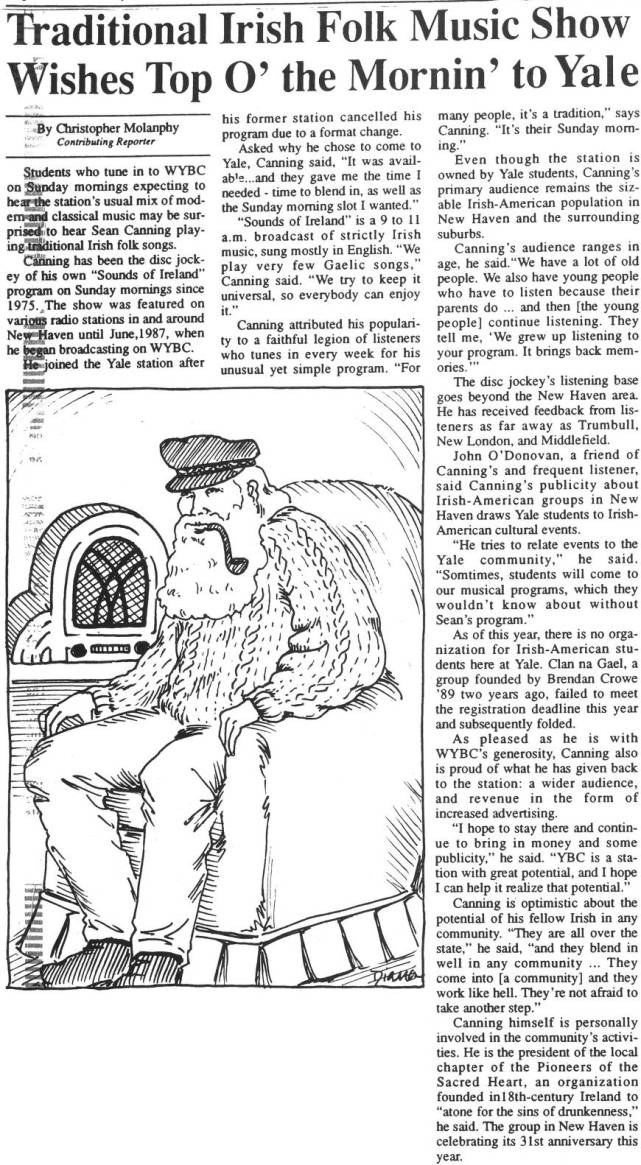 Students who tune in to WYBC on Sunday mornings expecting to hear the station’s usual mix of modern and classical music may be surprised to hear Sean Canning playing traditional Irish folk songs.

Canning has been the disc jockey of his own “Sounds of Ireland” program on Sunday mornings since 1975. The show was featured on various radio stations in and around New Haven until June, 1987, when he began broadcasting on WYBC.

He joined the Yale station after his former station cancelled his program due to a format change.

Asked why he chose to come to Yale, Canning said, “It was available… and they gave me the time I needed — time to blend in, as well as the Sunday morning slot I wanted.”

“Sounds of Ireland” is a 9 to 11 a.m. broadcast of strictly Irish music, sung mostly in English. “We play very few Gaelic songs,” Canning said. “We try to keep it universal, so everybody can enjoy it.”

Canning attributed his popularity to a faithful legion of listeners who tunes in every week for his unusual yet simple program. “For many people, it’s a tradition,” says Canning. “It’s their Sunday morning.”

Even though the station is owned by Yale students, Canning’s primary audience remains the sizable Irish-American population in New Haven and the surrounding suburbs.

Canning’s audience ranges in age, he said. “We have a lot of old people. We also have young people who have to listen because their parents do… and then [the young people] continue listening. They tell me, ‘We grew up listening to your program. It brings back memories.'”

The disc jockey’s listening base goes beyond the New Haven area. He has received feedback from listeners as far away as Trumbull, New London, and Middlefield.

“He tries to relate events to the Yale community,” he said. “Sometimes, students will come to our musical programs, which they wouldn’t know about without Sean’s program.”

As of this year, there is no organization for Irish-American students here at Yale. Clan na Gael, a group founded by Brendan Crowe ’89 two years ago, failed to meet the registration deadline this year and subsequently folded.

As pleased as he is with WYBC’s generosity, Canning also is proud of what he has given back to the station: a wider audience, and revenue in the form of increased advertising.

“I hope to stay there and continue to bring in money and some publicity,” he said. “YBC is a station with great potential, and I hope I can help it realize that potential.”

Canning is optimistic about the potential of his fellow Irish in any community. “They are all over the state,” he said, “and they blend in well in any community… They come into [a community] and they work like hell. They’re not afraid to take another step.”

Canning himself is personally involved in the community’s activities. He is the president of the local chapter of the Pioneers of the Sacred Heart, an organization founded in 18th-century Ireland to “atone for the sins of drunkenness,” he said. The group in New Haven is celebrating its 31st anniversary this year.