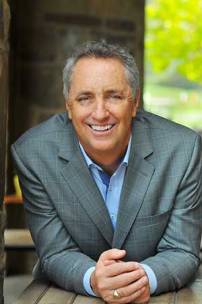 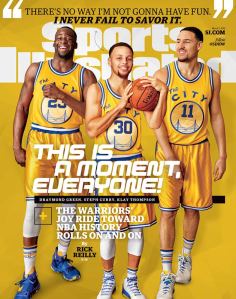 Rick Reilly’s cover story last month. In this photo, just like in politics, the Green Party is on the left. (Photo: Walter Iooss Jr. for SI)

Take his recent Sports Illustrated cover story about the Golden State Warriors, the basketball team which just set the record last week for most wins in a regular season. Almost any other writer would have structured the article around  superstar and Most Valuable Player award winner Steph Curry. Instead, Reilly structured the article around 15-year-old Sofia Petrafesa, afflicted with a bone cancer that shows up only 200 times a year in the U.S., a girl whose only dream is to see the Warriors play.

As another example, take Reilly’s 1999 column “Funny You Should Ask” which many people (including myself) consider to be his best piece. It’s kind of about sports, but mostly it’s about life itself, as in this beautifully eloquent paragraph:

I don’t think the meaning of life is gnashing our bicuspids over what comes after death but tasting all the tiny moments that come before it. We’re here to be the coach when Wendell, the one whose glasses always fog up, finally makes the only perfect backdoor pass all season. We’re here to be there when our kid has three goals and an assist. And especially when he doesn’t. 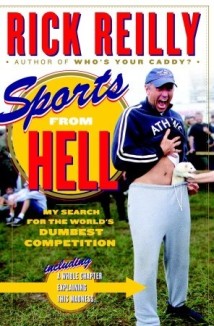 Plus Reilly wrote one of the funniest books of the past few years — “Sports from Hell: My Search for the World’s Most Outrageous Competition.” In it, he goes around the world competing in everything from Chess Boxing to the World Sauna Championship to the Three-Mile Golf Hole.  And those are some of the less ridiculous contests.

Reilly is one of the best sportswriters but would probably be one of the worst horoscope writers. Here’s a quote from his 2011 University of Colorado-Boulder journalism school commencement speech:

“We’ll be fine. You guys should hang onto those diplomas. They’re like collectors’ items. It’s like ‘Donald Trump for President’ bumper stickers or polar bears. You’ll never see them again.”

So which early piece of writing did Reilly choose to feature here?  A Colorado native, Reilly, while still a sophomore in college, started writing sports on the side for the local Boulder Daily Camera newspaper . His first piece in May 1979 was about the local marathon, which even included a short interview with then-Governor of Colorado who was at the race. The article is copied below in text form at the end of this post, with a photo of the print edition version included as well.

As Reilly lamented when re-reading the piece for the first time in decades a few weeks ago, “It wasn’t much, was it?” To be perfectly honest… no, it wasn’t. Yet perhaps that just underscores the point: the best writers aren’t made, they’re developed.

Here’s how Reilly describes the experience in his own words:

The Boulder High School Owl, my first newspaper was called. “Hoo’s Hoo at BHS” I think was one of my columns. Yes, it was.

The Owl was HUGE for me because that was the first time I could actually write for somebody else. As opposed to my terrifyingly-detailed “newspaper” accounts of me and my 10-year-old friends’ exploits in Home Run Derby every day and what we did at “night” — I dated Joey Heatherton, I remember, and drove a Rolls-Royce.

Also, through the Owl, I competed in the state high school journalism contest, where I won first place in sportswriting. They gave you a list of random facts about some game, all mixed up, some important and some not, and you had to bang out a game story in six paragraphs and 15 minutes. Somehow, I think I got the word “obstetrician” into it.

Anyway, the judge was the assistant sports editor at the Boulder (CO) Daily Camera. The problem was he judged the contest anonymously. That is, nobody’s names or towns were on the entries. So he didn’t know who he’d picked. When I won, I tried desperately to find him and ask for a job, but he was gone.

BUT… I was a teller at the local bank that summer after my senior year and who do I end up “telling” next to but the guy’s WIFE.

I begged her for a month to tell him I was the kid who won the contest and would they need any help? And finally she did and he immediately called me and gave me a JOB, which I worked at 40 hours a week while going to CU [University of Colorado at Boulder].

And, anyway, that’s how I got my break.

And now, here is — in both photo and text form — Reilly’s 1979 article about a Colorado marathon. (Reilly can be found at his official website RickReillyOnline.com, and follow him on Twitter @ReillyRick. Read and watch his ESPN articles and videos here, and read his 10 best Sports Illustrated feature articles through the years here.)

Click the photo or open it in a new tab for a larger version.

The business is a wholesale running gear company — International Sports, operated out of Boulder by Allen and assisted by Barksdale. The company deals in professional equipment for the serious runner. The other business the two are involved in is actually running marathons. Allen won the first annual Boulder Memorial Hospital Life and Health Marathon earlier this year, and Barksdale claimed the United Bank of Denver Mile-High Marathon Sunday.

The red-haired Barksdale, who turns 25 today, beat the searing mid-morning sun, the altitude, and 1,657 other runners to win the title and cross the finish line at the Brown Palace Hotel in downtown Denver in 2 hours, 33 minutes and 39 seconds.

“I never pushed it,” an exhausted Barksdale said afterwards. “It was so hot out there that after a while, I realized that running with a kick was going to be ridiculous. I just decided to keep up a steady pace. The heat took at least five minutes off my time. So did the altitude.”

Barksdale took the lead at about the 20-mile point on the scenic Denver course and was never behind after that. Second place went to Longmont’s 18-year-old Perry Evoniuk, who ran 2:35:47.

The women’s winner was Bette Popper, a Littleton native and a member of the Rocky Mountain Road Runners, co-hosts of the event. She finished in 3:13:30, unofficially.

A crowd of about two thousand people roared as Barksdale made the turn onto 17th street off of Glenarm and headed into the last yards of the gruelling 26-mile, 385-yard course. When he arrived, a swarm of television cameras and reporters greeted him, along with Gov. Richard Lamm, who placed an Athens-like Olympic wreath around his head.

Lamm had already run his own 13-mile race earlier in the day, but remained at the race site for a few hours afterwards.

“This is such a joy,” he said. “I envy these people [finishing the race]. But you don’t have to go 26 miles to enjoy running. You should be able to run around the block and still have fun.

“I just ran 5 or 6 miles a day, but I keep thinking it would be a good goal to try and run one of these things. I have so much fun now, though, I would hate for it to become a chore. There are already so many chores in life.”

Women’s champ Popper was greeted with the same type of enthusiasm as she neared the finish.

“I have the best fan club in the world,” said Popper. “This is wonderful. The course was beautiful. I ran badly, but it was good enough to win, I guess.”

Businessman Allen, a native of England, dropped out of the race near the 20th mile but Barksdale, the man they call “Hammerin’ Hank,” hung on to win his first marathon ever.

The slender Barksdale didn’t enter last month’s Boulder event because he was training for the Boston Marathon (where he finished 190th). He says he will probably run in the New York Marathon.

Barksdale defeated former CU track star Mike Peterson, one of the favorites of the race, who withdrew after 24 miles because of blisters.

“The heat made all the difference,” Houk said. “It was bad for me. Even before the halfway mark, I could feel it. It was a lot easier to run last year.”

Though the breakdown made complete results unavailable, Boulder also had one of the best efforts by a young runner Sunday. Twelve-year-old Jay Roper finished the 26-plus-mile race in 3:56.