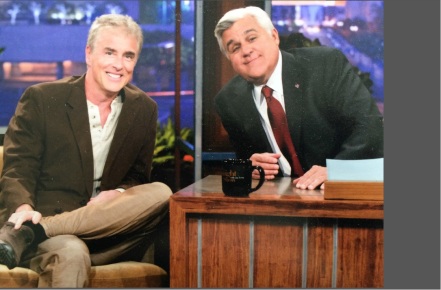 Michael Jann was a 22-year comedy monologue writer for The Tonight Show with Jay Leno and Emmy-nominated writer for Jimmy Fallon. Writing from 1992 through the show’s finale in 2014, Jann wrote more than a hundred thousand jokes, of which Leno told more than ten thousand. (Seriously.) As part of Fallon’s monologue team, he was nominated for Outstanding Writing for a Variety Series at last year’s Emmy Awards, though Jann and the show lost to The Colbert Report.

Recently he has also begun writing comedy film screenplays with his girlfriend and screenwriting partner Michele Jourdan. Two of his scripts — Laughing Stock, about a down-on-his-luck comedy writer who takes an exotic vacation, and Cathouse, about a software salesman who gets more than he bargained for when taking his virgin stepson to a legal Nevada brothel – are both currently being considered by major Hollywood studios. 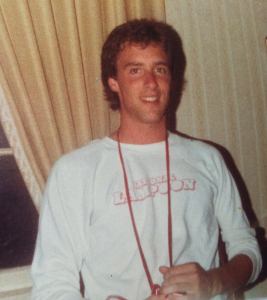 Michael Jann at 22, about the same age he was when he wrote his first humor column.

But even the biggest names have to start somewhere. Jann’s first-ever entry into humor writing came in 1979 during his junior year at University of Connecticut, when he wrote a column for UConn’s humor newspaper The Forum of intentionally bad advice called Dear Uncle Bart. Jann writes of that early experience:

Long before I became a Tonight Show writer, I was a wildlife biology major at UConn during what felt like a golden era of comedy: Animal House was in the theaters, Woody Allen was in his prime, SNL had just launched — and I wanted in. I was too shy to be a performer (and probably not funny enough). But I loved to write, and I had a good idea: a fake advice column for the school paper in which I’d write fake heartfelt letters from students, and answer them myself with the worst advice imaginable. (It was also a way to flirt with girls — the name on the very first fake letter, “Donna”, was a girl in the next dorm I was in love with.) The column was an instant hit on campus; I was ecstatic. And I vividly recall my seminal moment: bounding up the steps of the Student Union one late fall afternoon, clutching my latest batch of “Uncle Bart.” I stopped at the top step, and realized: “I’m running here for no pay, and for no grade — and I’m SO happy! I want to do this for a living!” 100,000 Jay Leno / Jimmy Fallon monologue jokes later, I look back at this first effort, and I think it holds up pretty well! But what’s interesting to me is I can see clearly my career-long style of comedy writing: My method has always been to state something that’s not true, and pretend that it is, and keep a straight face. (“Childhood obesity is getting worse. I saw a kid in the park today crying that his hula-hoop was too tight.”) Today, my favorite comedy is “The Onion”, whose writers do exactly that…

Below is a PDF scanned copy of the column as it appeared in the print version, which you can read by clicking on the title below, or below that you can read the text itself:

I’m so upset! Somebody stole my typewriter from my room. I just don’t understand how anyone could do such a thing. It’s not very valuable, and it’s sort of broken. Whenever you push the “t” button you get a capital “T” instead. But it doesn’t bother me at all, because of sentimental reasons. My grandfather (God rest his soul) gave it to me, and my grandmother gets a big kick out of reading the letters that I send her, big “T”s and all. It’s such a shame that some creep had to steal it. Whoever you are out there, I hope you feel guilty right now, you stinking lousy piece of garbage! Thank you for printing this letter, Uncle Bart.

A.   Any time, kiddo. You’ve said iT all. IT’s a sad world we live in when privaTe properTy isn’T respecTed.

I heard something I can’t believe. Maybe you can clear this up. Last month, after the UConn basketball team beat Harvard, did Harvard protest the game? I heard that in the locker room after the game the Harvard team typed up an eight page protest in which they quoted Descarte! What gives, Uncle Bart?

A.   It’s no joke, Mark. It’s Ivy League basketball at its best. I spoke with regional director of the referees, and learned that Harvard almost won the appeal. Their contention was that “we don’t exist, how can we be sure we lost the game?”

But several UConn players were quick to shoot down that argument by gesturing about their shorts, and insisting that the Harvard players “Descarte this!”

I’m a 6th semester student here at UConn, and I’ve had about all I can take. The whole education process here is warped! The emphasis should be on learning and practical application, but all these teachers seem to care about is picky little details. I think there must be a better way to gauge what we learn than by forcing us to answer those multiple-multiple choice questions on the pickiest little things. Before I go crazy, Uncle Bart, I have one question: Why are the teachers here so damn picky, and will things ever change?

A.   That’s two questions. You said one question. Work on it.

My husband and I need your help. We have two children, a boy 11, and a girl 9. They are impossible to control, they fight and scream all day long, and even when they’re getting along they drive us crazy. My husband doesn’t like to come home right after work anymore. I’ve been so irritable, I need 3 or 4 drinks before dinner. It’s affecting our marriage, Uncle Bart, do you have any solutions? Even a suggestion? Even when we go out there’s a problem – it’s almost impossible to find a sitter for such brats. How can I control them?

A.   Your troubles are over. Send now for “Uncle Bart’s Embalming at Home Kit.” It’s fast, it’s easy, and it works! Keep the little rascals still for as long as you want. Remember, embalming never killed anyone. Send $19.95 to C.D.C. c/o Uncle Bart, and if you order now, I will also send you, absolutely free, a “Sew Their Lips Kit.” Kids… who needs ‘em?

I need help. My roommate has a cat, and kittens (real cute!), but sometimes when I get really mad at my roommate I put the kittens in the freezer for hours. I know it’s wrong to take it out on the kittens, and I’m trying to stop. I’ve got to stop this because it’s wrong, and if I ever get caught I’ll be put away for… Oh no! Don’t print this letter or I’ll be found out! I’ll stop, I swear, just don’t print this letter! Please!

Begging You in Buckley

A.    I hope the proper authorities read this, and put you out of business for good.

We have a problem. My wife Jane invested $2,500 in a full-service commercial bank at 6% interest compounded daily, and she also invested $4,000 in mutual funds that are increasing in value at the same rate as inflation. She is worried because the in-laws (my folks) are coming to dinner tonight and my dad always tries to convince us to put all our money in a savings and loan association at 8% interest compounded monthly. Should she call him “Dad” or “Tom,” and should we take his advice?

A.   You vermin! So now you’re trying to get me to do your Accounting 131 homework! You think you can fool me just by dressing it up with a few in-laws? Do it yourself you sponge, and while you’re at it, grow up!

I need your help. My new roommate has got to be the biggest loser on campus, and I’m stuck with him. He smells. And he sneezes all the time, and he vocalizes them like this: Aaachooweeee. He’s a slob too, and he has war pictures on the wall. War pictures! Whenever I have a girl in the room he won’t leave, he just sits there and tries to tell us about the Blitzkrieg. How can I get him out of here for good? Would Student Affairs be able to help?

A.    O.K. Hateful, you’ve got a good case for Student Affairs, but first you’re going to do some digging. Get some dirt from this guy’s past. Was he ever a child molester or a math major? Call up his folks, they might want to help. They might want to put their little Lord Fauntleroy out of business for good. I know mine would.

I’m a 6th semester student, and the father of four. What are contraceptives?

A.   Contraceptives are small devices that may insure your academic career. They aren’t hard to come by, but they can be expensive.